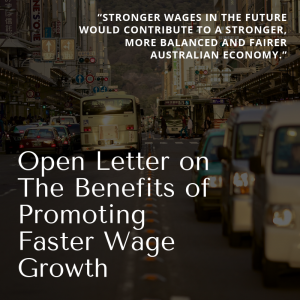 Open Letter on The Benefits of Promoting Faster Wage Growth

124 labour policy experts have today published an open letter calling for proactive measures to help accelerate the rate of wages growth in Australia’s economy. The legal experts, economists, and other policy analysts agreed that “stronger wages in the future would contribute to a stronger, more balanced and fairer Australian economy,” and they proposed several broad strategies to boost wages.

The letter is being circulated today through internet and social media channels, and through afull-page advertisement in the Australian Financial Review.

Here is the letter and the list of signatories and their complete titles and affiliations.

The letter has generated substantial media coverage, including articles in the ABC, The Guardian, and The New Daily.

Richard Denniss, Chief Economist at the Australia Institute, also tied the open letter into hispowerful column on the causes of wage stagnation.

The open letter was initiated and circulated by the 3 co-editors of a recent collection of research essays on the wages slowdown (The Wages Crisis in Australia: What it is and what to do about it, published by the University of Adelaide Press):

“There is a growing and legitimate concern in Australia over the erosion of real living standards. Boosting wage growth is the best way to reinvigorate the promise of shared prosperity that is essential to a healthy and productive society,” said Dr. Stanford.

“This is not a problem that is going to fix itself”, added Professor Stewart. “We need to see a policy response from governments at all levels – and an acceptance that lifting wage growth can help the economy, not harm it.

Dr. Hardy said, “The problem of stagnant wages is a complex one. While there is no singular or straightforward solution, it is increasingly clear that combatting the current wages crisis will require concrete and decisive action.”

Included among 124 co-signers of the letter are numerous distinguished policy experts, including:

Prof. Roy Green, Emeritus Professor, Innovation Adviser, and former Dean of Business School, University of Technology Sydney: “In current conditions, wage increases can be a significant driver of growth and productivity through the incentive effect on capital investment, and the demand effect on capacity expansion. Keeping wages depressed is not only disadvantageous for workers but it is bad for business and the wider economy.”

Prof. Sara Charlesworth, Distinguished Professor of Gender, Work and Regulation in the School of Management at RMIT University: “Wages fully reflecting the value of the work women undertake are vital to their well-being and fundamental to gender equality.”

Prof. John Quiggin, ARC Australian Laureate Fellow, School of Economics, University of Queensland: “For decades, government policy has been designed to weaken unions and push wages down. It’s time to put that process into reverse.”